Casa de Yemanja. A meeting house for local fishermen and home to a shrine for this Sea Orixa (goddess) who is celebrated EVERYWHERE here!

Even Brasilians go all misty eyed upon mention of this region which is thirty hours by road north easterly or a three hour flight.

Back in Sao Paulo, Bahian Ayume played me this music video by Salvadoran superstar Creole. The imagery says it all 🙂

The City of Salvador

Perhaps it because I’m finally in the swing of my travels, stringing together the lingo, feeling less like a stiff European but there seems SO much to explore here. I’m over-excitedly-whelmed – there are good vibrations on the Baiano breeze – it’s a melange that I looking forward to truffling my snout through.

I Couchsurfed with Luciano and his kind family in Salvador during my first week. Their apartment, a stone’s throw from Praia (beach) de Piata is where I walked the family pug and ran across the sand into the sea.

Formerly known as: São Salvador da Bahia de Todos os Santos meaning City of the Holy Saviour of the Bay of all Saints this historic hotpot of a cidade was the first colonial capital of Brasil and the city is one of the oldest in the New World (founded in 1549 by Portuguese settlers). It was also the first slave market on the continent, with slaves arriving to work on the sugar plantations from Angola, Benin, Nigeria.

Mosaic is also everywhere here. And graffitti. All in all: a visual feast.

The beach is buzzing early in the morning when local people are there enjoying the cool air. Men and boys play football right up and down the beach. The ball bounces towards the sea, they tackle in the waves. Some teams are more ’official’/organised that others with coloured bibs.

Lots of beach dogs, laying spread eagle or randomly barking. Their seem to hang out with the fishermen who, like others live on the beach as far as I can tell. Simple homes can be seen in amongst some of the ‘coqueiros’ (palm trees). I’m reminded of the equivalent fishermen huts on the Black Shore in Southwold, Suffolk where I’ve wandered since childhood.

I take the bus to the Centro Historico and meet Monika in Pelourinho. It’s a happy coincidence that we’re both in Salvador at the same time. We worked together in Rio and became firm friends.

And oh—oh—OH! —this is a stunning place. I feel as though I’m suddenly in renaissance Europe,…..Italy or Portugal. This is one of the best preserved old towns in Brasil and it really does take your breath away. 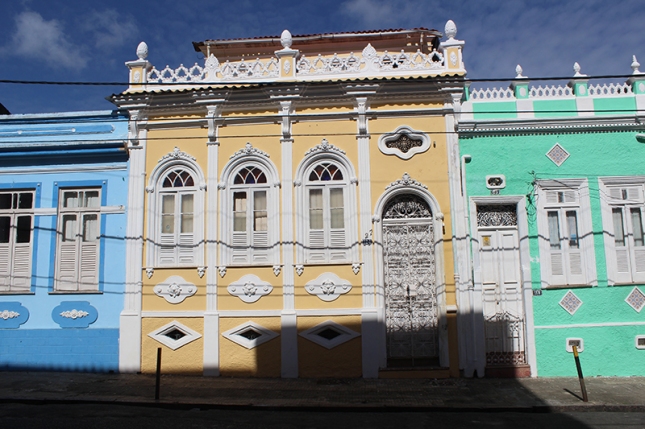 Decorative features at every turn and a sweet shop palette of colour to boot. Is this place real?!

The name Pelourinho meaning Pillory, comes from the central whipping post “where slaves received punishment for various infractions, as well as for disciplinary purposes” (- Wikipedia). Crikey, this place is STEEPED in history and poignancy. It’s both an awe inspiring and thought provoking place to be.

Monika and I wander the cobbled streets through this neighbourhood on to the sleepier more residential yet equally colourful Sao Antonio. Sipping a couple of 4R$ (£1) cans of Schin beer the two of us perch in a Praca outside an old church with children playing and local families relaxing all around. Dreamy!