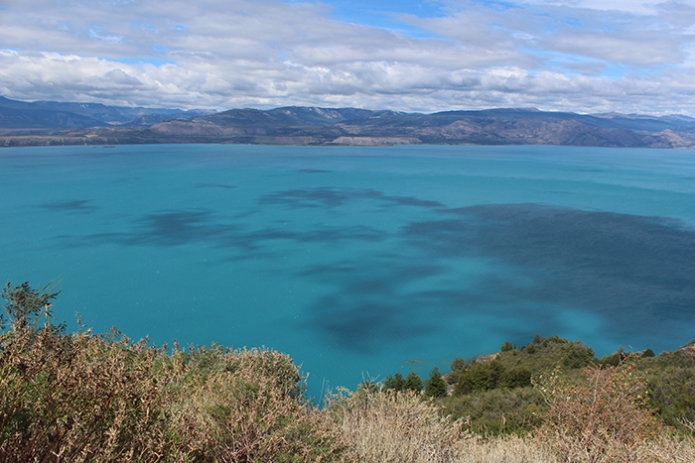 There was a bottleneck of Backpackers in Puerto Rio Tranquilo

I kept bumping into the same faces. Many of us, with our Chilean $ pesos running low were staying in the ultra-ultra-budget campsite in town. What you lose in basic services you gain in camaraderie: the cheap places are always the friendliest 🙂 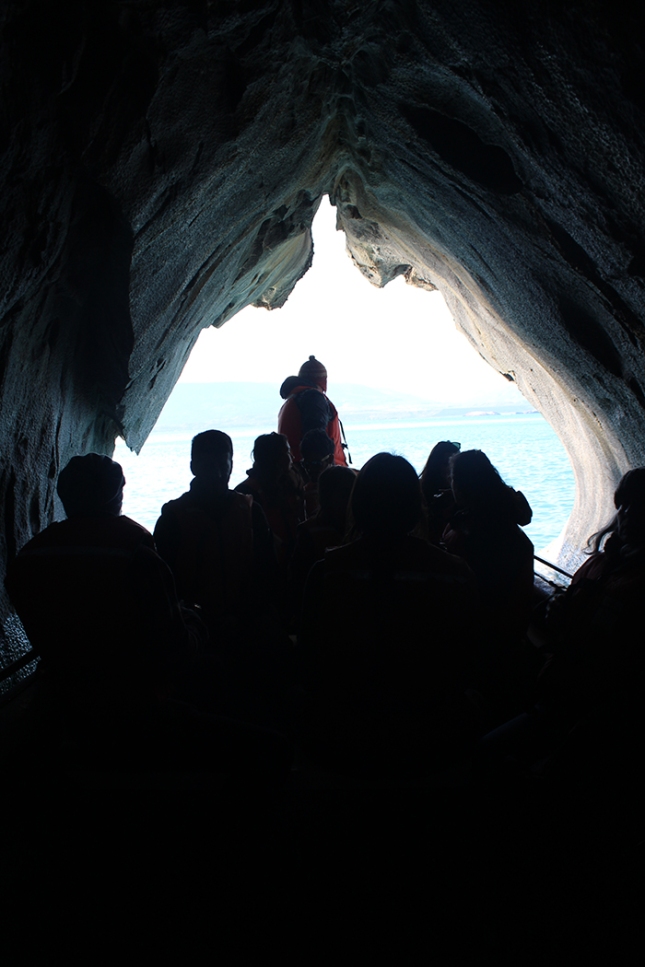 The town’s popularity is the result of the beautiful Capilla de Marmol, the ‘chapel of marble’ caves out on a Laguna General Carrera. Whipped cream rock formations on transparently turquoise waters, you’d be forgiven for thinking you were in the Caribbean if it weren’t for the nippingly fresh wind. 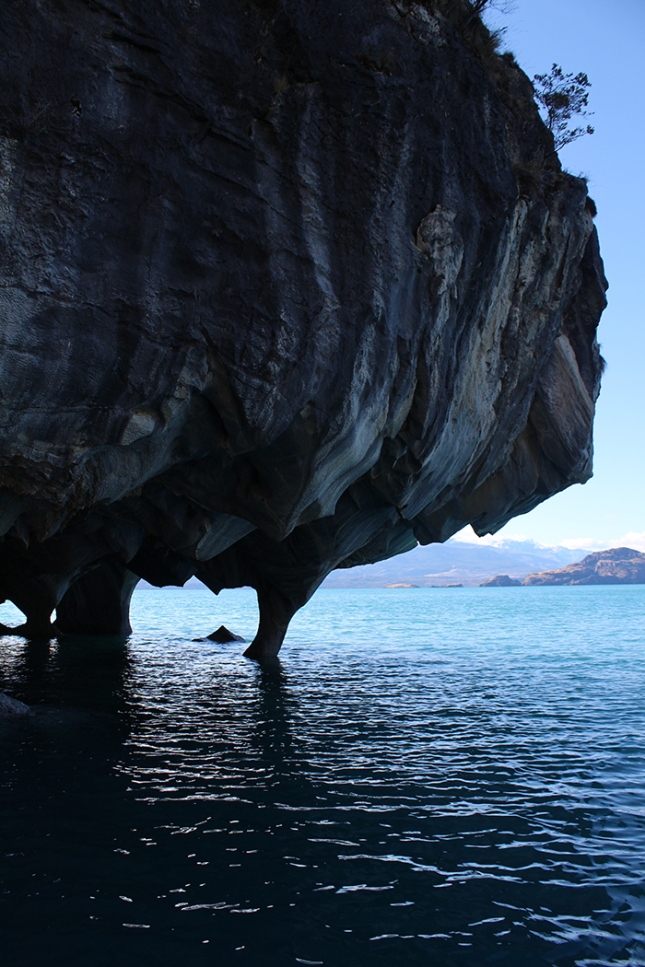 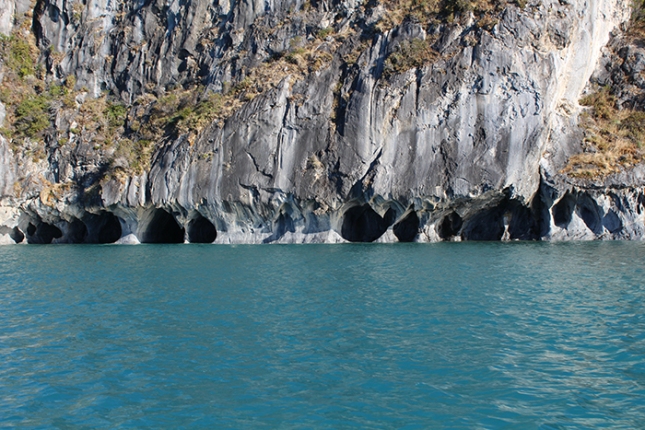 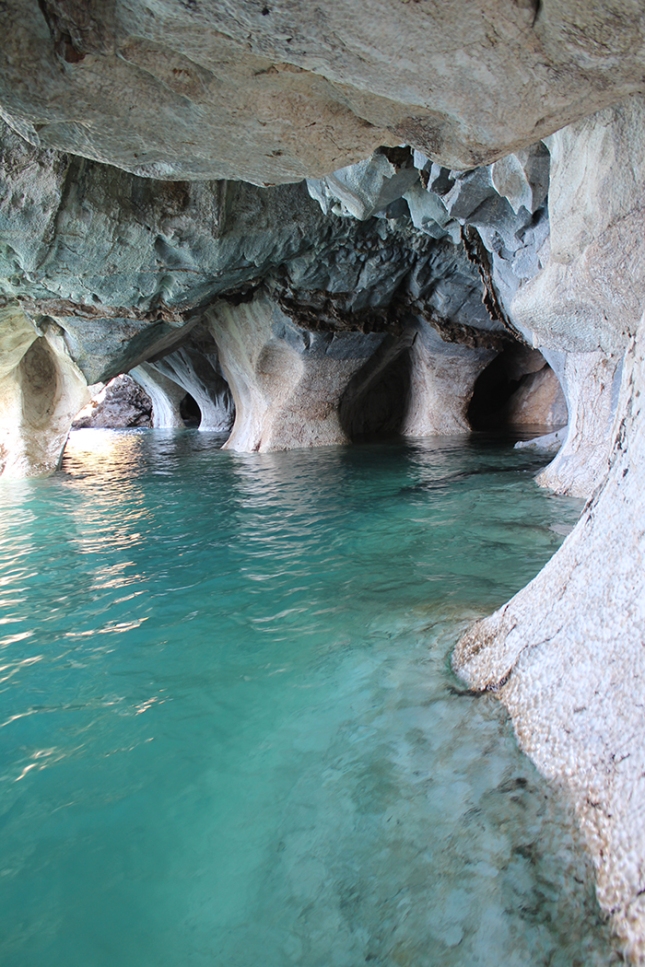 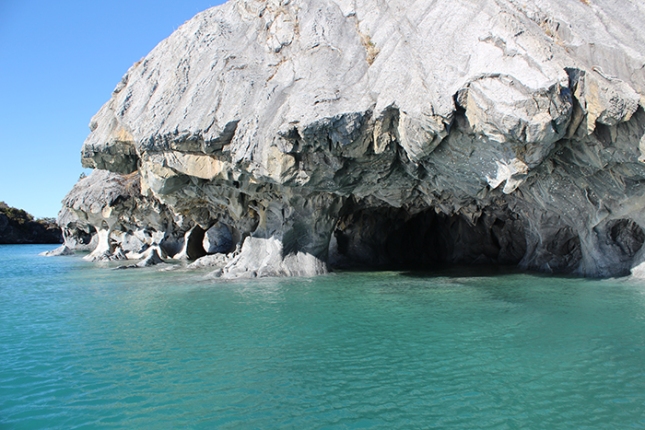 How to get to Chile Chico?

I had only $10,000 (£10) left in my pocket and still 165 kilometres left to cover before Chile Chico and the prized border back to Argentina. Chilean Patagonia had haemorrhaged my savings. I was feeling anxious and a little stranded.

With so much competition, hitchhiking out of here felt almost impossible. The season was almost over and only a trickle of vehicles were passing through.

Nevertheless, I chose to wear my bright pink tight that day in the hope that I might stand out from the crowd of roadside thumbs. 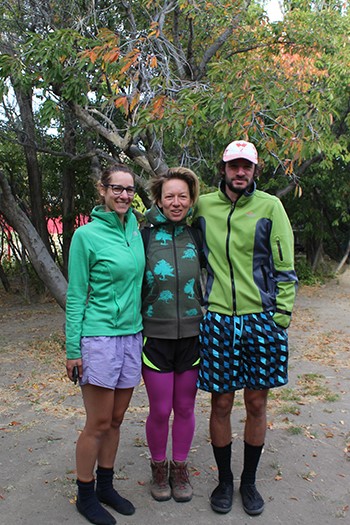 No sooner was I concocting rescue Plans B & C when two twin-like Aussies pulled up in a white Chevrolet. I loitered like a street dog drooling for a bone. As they bid their previous hiker ‘adieu’ and I blurted out,

I stuttered in disbelief

…when I heard their affirmative response – really? Really? “Are you sure?!” Miracle workers! they agreed to have me aboard in that relaxedly Aussie drawl I love. We were on our way to Los Antiguos, the first town after the border crossing and I felt like I’d won a Golden Ticket to Willy Wonker’s Chocolate Factory! 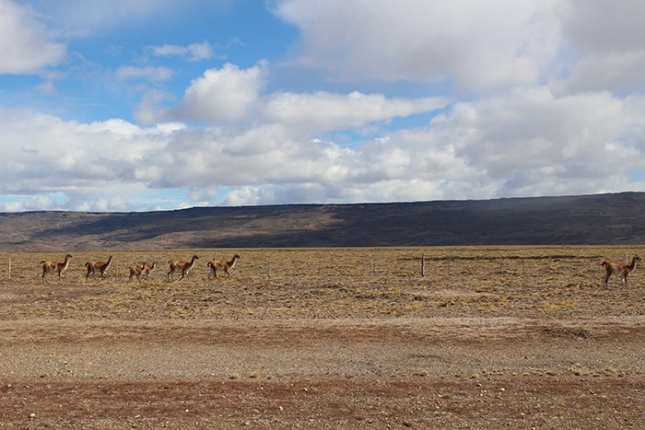 Ruta 40 goes on and on and on….remote plains of pampa and family groups of Guanacos pose by the roadside

What began as a ride across the border turned into two days of travel with Francesca and Anthony, sister and brother scientists from the Blue Mountains of Sydney. They shared their love of canyoning and mountaineering in remote places all over the world that left me yearning for more. 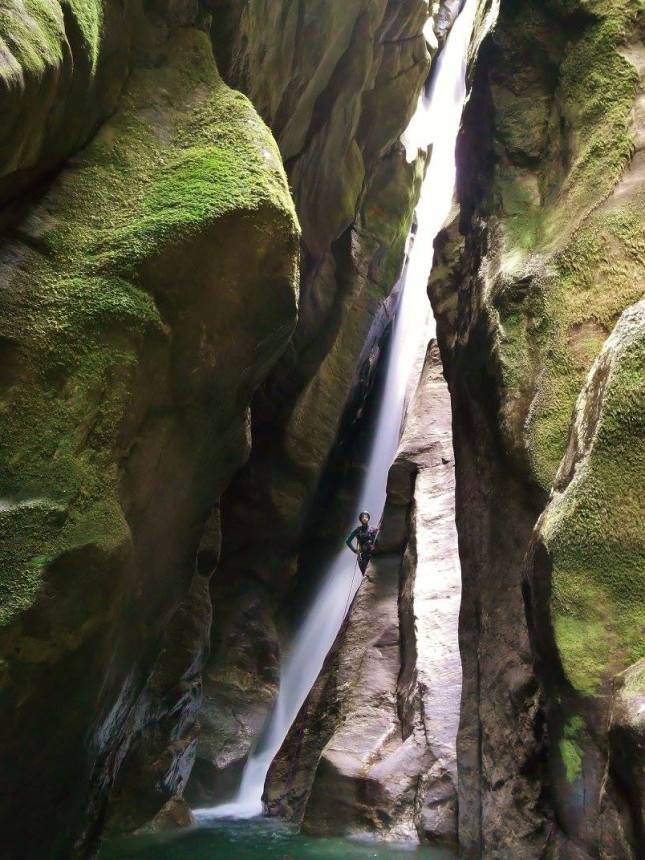 I heard about their father’s backpacking travels across India during the late sixties – a man I’d love to interview! what a dude.

From the unique ecology of New Zealand and the national parks of the United States….to the recent time they found a young woman gravely injured from her car crash in the Californian desert and rescued her back to safety.

Over humble meals of bread, tomato and cheese (‘Backpackers’ Delight’) we enthused about our favourite flavoursome foods from Asia. 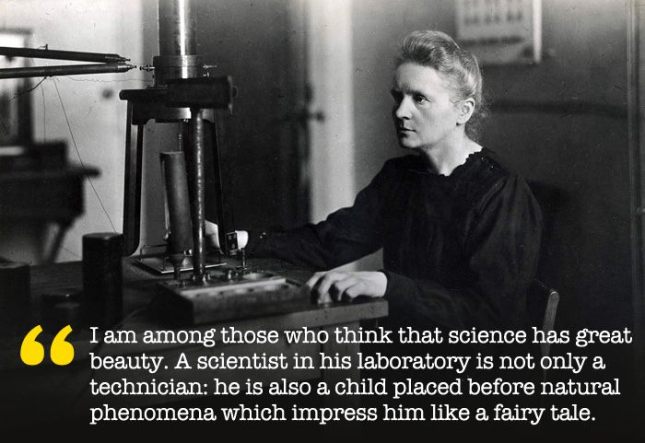 The words of Marie Curie (pioneering Polish-French physicist and chemist, 1867-1934). She was the first woman to win the Nobel Prize and, the first and only person to win it twice.

A conversation highlight was Frank’s animated description (in layman’s terms for me) of the wonder of Proteins, a subject at the heart of her phD research. Wonderful images grew and duplicated like cells in my imagination as she described their place in everything within our bodies, our organs, the systems that govern our physical function and outside of us, all around us, in everything! Marie Curie’s words came to mind. 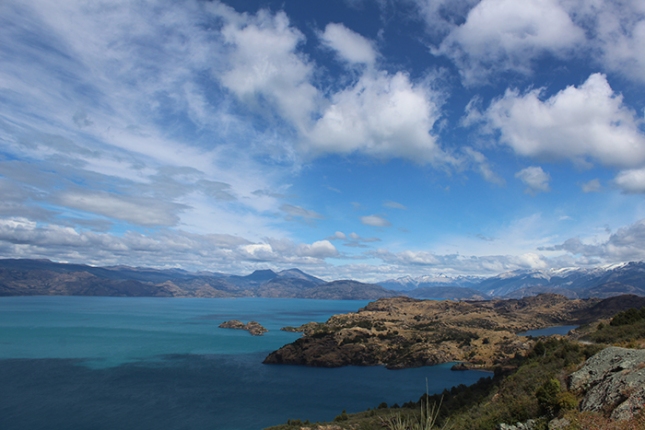 From Los Antiguos to Perito Moreno to Bajo Caracoles to Tres Lagos….we covered 704kms together. That feeling of good fortune never wained thanks to their familial company and all the fabulous stories. 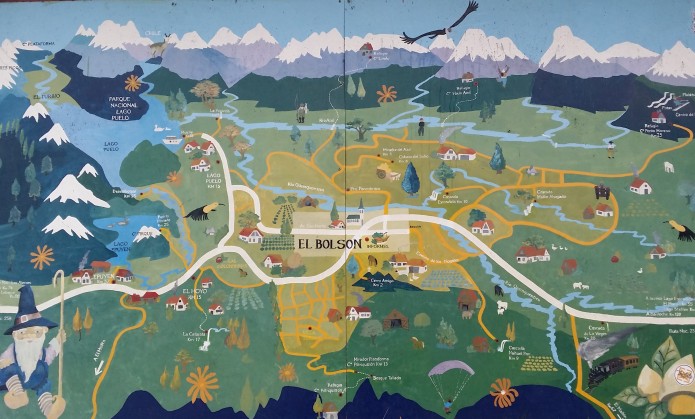 In Spanish the thumb is also called a finger, hence to ‘thumb a ride’ is to ‘dedo’.

It may sound silly but hitchhiking is there amongst my childhood dreams. As a young whipper-snapper in sleepy town Suffolk I envisioned true travel as sharing the back of a pick-up with local farm workers in a far away land.

In Argentina ‘dedo’ was something I was ready to try. 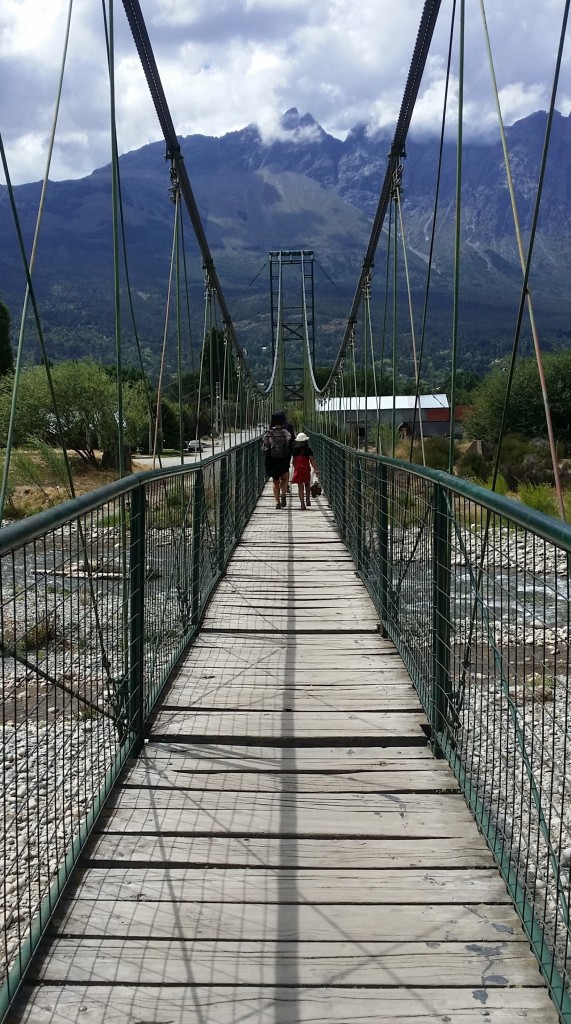 It wasn’t until I reached the hippie town of El Bolson, south of Bariloche and met Andre, that I was ready to get started. 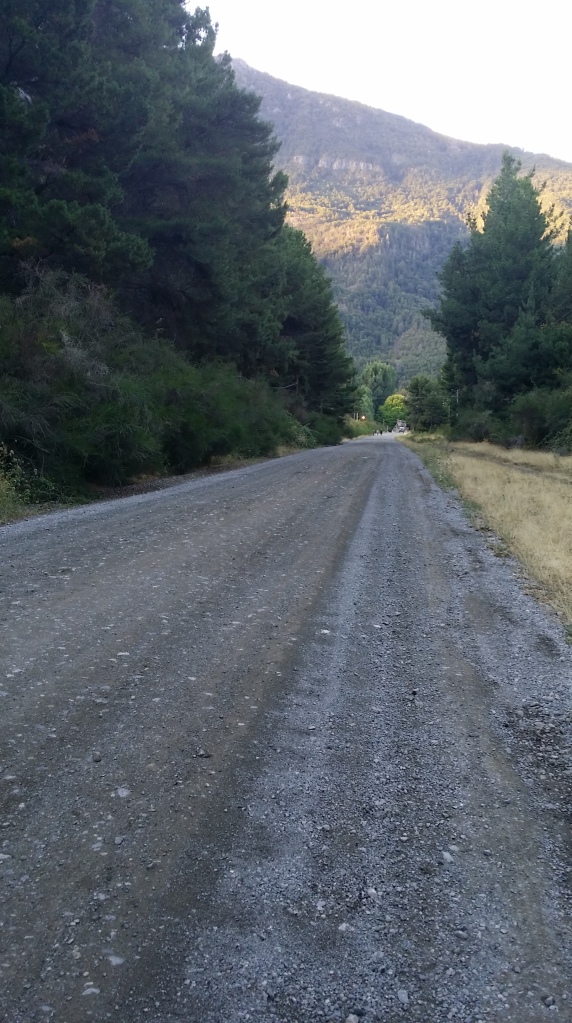 We met in budget $60 (£3) camping across the river. I was the only extrangera within a camping community of South American bohemian travellers escaping the cities for summertime work, selling their ‘artesania’ or touring in bands.

Two days of relentless rain storm left all us seeking dry refuge in the rough wooden cabin that served as a kitchen. The innate desire to share —COMPARTIR!!— meant that food was busily prepared and bubbling away on the stove for everyone who was to join the congregation.

It was such a toasty night of macrame and drawing around the table, bottles of beer and wine passed like mate, from one to another along with songs and stories. We ate steaming hot comida under one dangling bright light bulb suspended above a long wooden table. 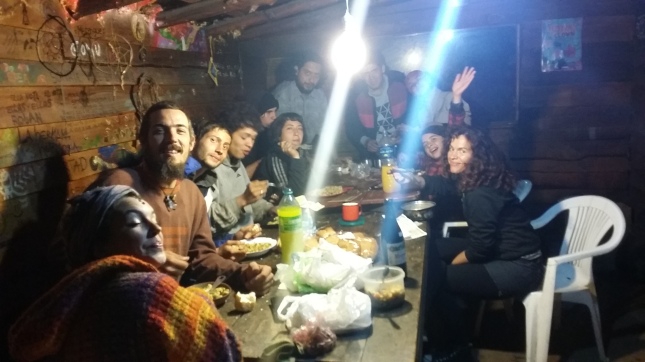 I don’t think the wooden walls of this little shack had ever felt such good cheer!

As well as the usual conversation comparing countries and languages we compared confusion at jazz music theory and listened to old cheerful tunes from the 1920s. Andre twanged a version of Durazno Sangrando, an Argentine classic by amazing Luis Spinetta. Common to the others but new to me was the strangely beautiful tale of a bleeding peach.

The next day, after lots of chat about the ‘what ifs and where fors’ Andre helped me find a good spot for a ride out of the town: by the gasolina station after the supermarket.

I was ready! and it was thanks to him and some encouragement, for giving me that —final—–gentle—–push——

Within 30 minutes Katia, a ceramicist from El Hoyo offered me a ride and I was on the road! 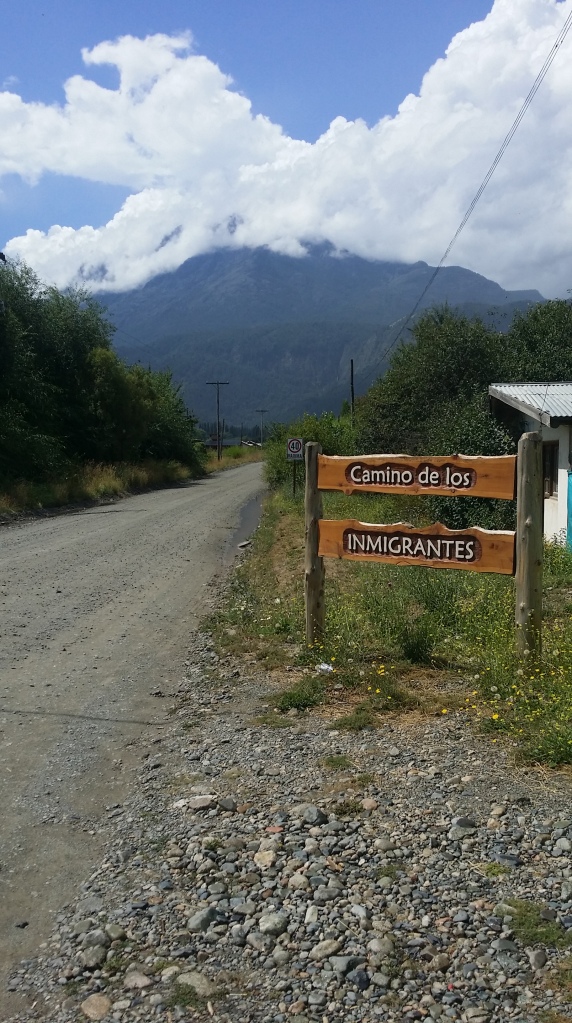 ‘Immigrant Way’, a name that made me smile as I waited for another ride 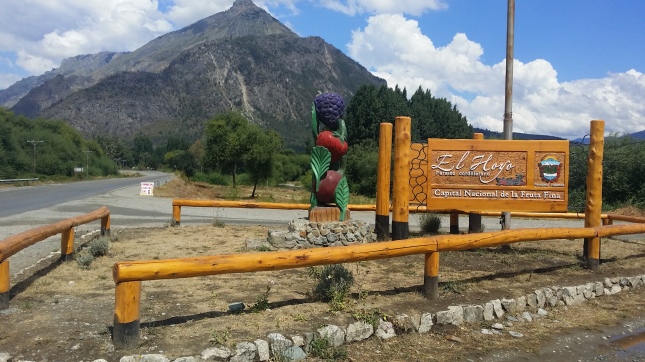