I’ve noticed this fragrant waft in the air ever since touchdown in Brasil. “Carnavalcarnavalcarnavalcarna….! It turns out there’s a storm a’ brewin’, a colourful one and the anticipation is palpable.

“Between New Year’s Day and Carnaval Cariocans are restless,” explains Natalia, a young lass from Santa Teresa where I’ve been living and working. “we can’t focus on work and making plans; when the party’s over, it’s then that the new year officially begins.”

Gosh, it feels so different from England where I’ve grappled for a Bank Holiday Monday like a precious extra day of freedom. This country, in contrast enjoys a lot of public holidays and dancing in the street is perfectly normal. 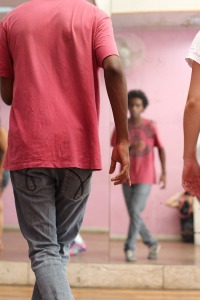 Apparently everyone will think me -c-o-o-l- and be surprised that a ‘gringa’ (stiff, self-concious, flat-bottomed European) knows the solo Samba foot shuffle.

I join a dance class with Felipe, Flavia’s brother. This year he’s determined to master the nimble footwork and as a lindy hopper, I feel confident that I can too! We go along to the ‘espacio de danca’ of famous Cariocan dancers, Sheila Aqunio e Marcello Chocolate on Rua Bento Lisboa. Surprising to me, dance lessons of every kind are everywhere in this city – yes – another stereotype broken: some Brasilians need dance tuition.

The teacher Gabrielle tells me to keep my footsteps close to the ground, no need to bounce on my feet or swivel my legs as is the Lindy habit of my muscle memory.

As a menina (girl) I dance on the front of my foot. As a menino (boy) Felipe on his heels. You push into the ground. “Um, dois, tres…um, dois, treeeees……pisa, pisa, pi—sa”. This all feels within my grasp until the tempo increases and then my style flies out of the dance school window.

The samba rhythm is hard to resist, “Chik-chik-a-boom-boom”. Before I know it my feet are drumming away, my inhibition begins to lessen, I imagine myself as the smiling minx in the clip above and I’m in Samba mode! A vision of what a Carnaval street party could be is conjured up in my mind.

Over breakfast one morning and in reference to my sister’s name Joy – Flavia, Felipe and their magnificent grandmother Elena try to teach me ‘Aurora’. The song is a well known ‘marchinha’ sung during Carnaval. These are the traditional songs wailed by the masses – everyone seems to know the lyrics!

Don Elena went on to recall how quiet Carnaval became during WW2 and, in turn, the most wonderful bombastic of Carnavals when the war was finally won and families were reunited. I really enjoyed hearing her tale and it set me off on a reverie of what war time Rio may have been like through the eyes of a teenage girl.

As part of getting my bearings, I hop on the Rio city Metro to Uruguiana and the Mercado Populaire to do some costume browsing. It reminds me of Camden, London – somewhere I worshipped as a teenager, going to the big smoke every now and then from Suffolk, on the train. 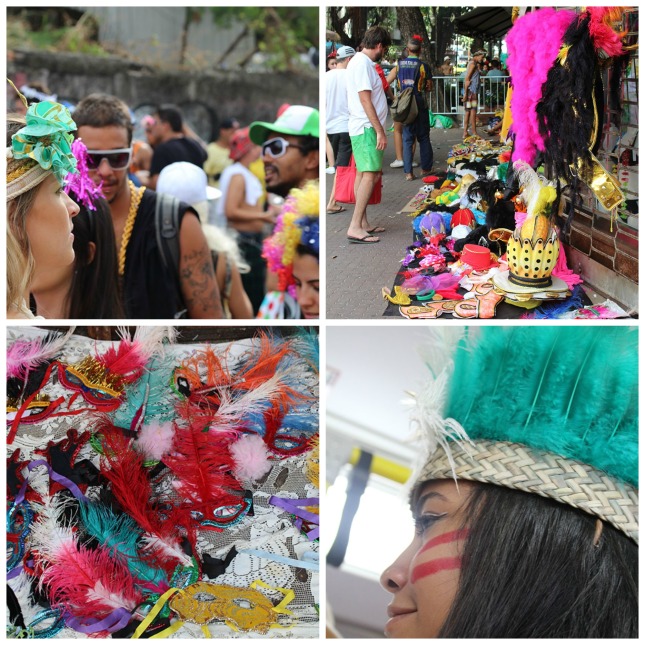 The streets are chokka block with shops of tack, chintz, fancy dress, haberdashery, wacky glasses that glow in the dark. I coyly come away with a R$10 mask and a note taken of the best plastic flower and fruit shop I’ve ever known. Mmmmm, at the very least a Carmen Miranda hair-do is in order! If there’s ever been an occasion to dress up and dress wild then this is it. 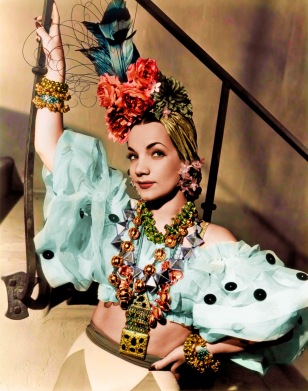 A couple of weeks before official ‘kick-off’ I join two friends on their way to a Bloco band rehearsal in Gloria. The Carnaval of the everyman is the umpteen block parties on every street of every neighbourhood of Rio and beyond, across the whole (vast!) country. 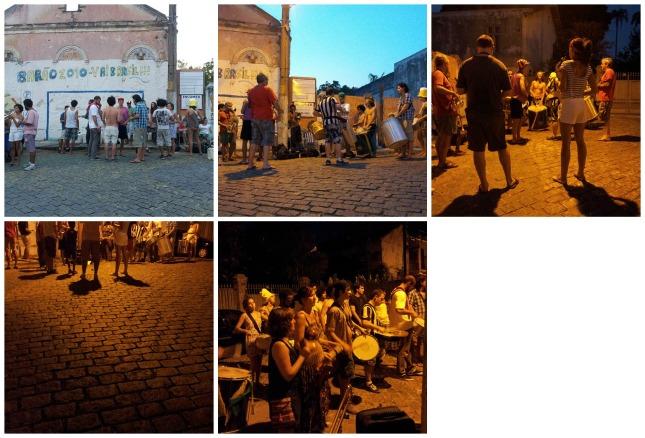 From sundown to moonrise the band get going – Gloria neighbourhood.

My friend, Jonathan is playing his soprano saxophone as part of the band of players. It’s all so effortless! A bunch of folk play their instruments on the street, sup ice cold beer courtesy of the beer man, children run around and locals, curious about the cheerful melody bouncing off the brick walls, trickle in to enjoy the foray from their nearby homes. As dusk settles and the moon rises the atmosphere gains momentum, foot tapping turns into hip swaying and not before long, a bloco is born!

The Carnaval fragrance grows ever stronger…..

5. Go to a Sambadrome rehearsal

On a Saturday eve, 6 days before it all goes officially nuts and I decide to hot-foot-it to the Sambadrome to see a samba school rehearse for the parade. “How cool,” thinks I, “not a Hippodrome, but a SAMBAdrome!” It tickled me to discover this purpose-built stadium all in honour of samba and it’s not just Rio that has one.

As luck would have it, I wangle a part time job within a week of my arrival at a guest house overlooking this beast of a stadium. To get in the mood for this ‘season of meat’ (carne=meat, eval=farewell to) I scurry along on a rainy night. Giddy supporters of the school beckon me over, thrust a plastic cup of beer in my hand, duck under my umbrella and proceed to teach me the Beija Flor (Hummingbird) samba school chant.

Beija Flor samba school sashay down the runway in the drizzle – full of gusto, big smiles and big costume.

It’s Sunday, 5 days and counting. I go along to Oswaldo Cruz in Zona Norte (North Zone) with Marisa, a cool lady I met at a local party at L’Argos des Neves just around the corner from where I live.

We take the train there and every carriage is full of revellers practising their chant. She tells me that Oswaldo Cruz is the original home of Samba and all the best dancers and schools originate from here.

We’re here for ‘Feira das Yabas’, an originally traditional do but essentially a warm-up bloco to the official Carnaval week. The word refers to Yaba Yemanja, a feminine deity. The ‘Yaba’ or matriarchs of the community cook delicious grub that is typical African within Brasilian culture.

A posse of us bundle off the train and walk through an unassuming residential area to the main street. There before us is the action – like a crazed mob from a zombie invasion – music, people and creative colourful head wear is a-plenty. The music is coming from a large float with singers aboard, gazing down from on high.

The Crooners at Feira das Yabas.

They serenade the heaving crowd who gaze back in adoration, arms outstretched, smiling and singing straight back. I’m told some of these singers are of cult status in Rio – Carnaval celebrities.

We enter the jolly crowd and my feet begin to shuffle on the ground, along with everyone else. Beer, smiles and ‘abracos’ (hugs) are all around.

Love is in the air!